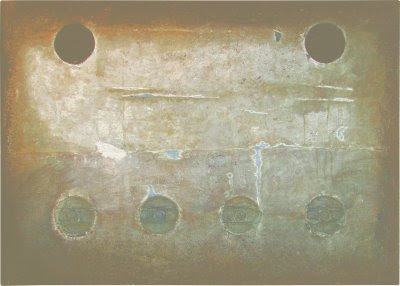 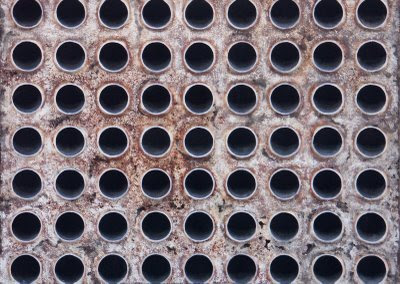 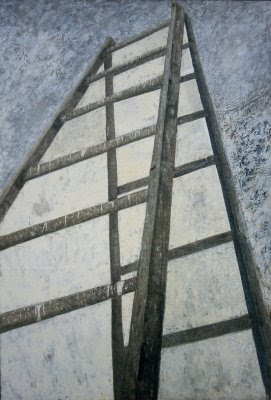 ladder, oil on canvas, 220x150cm, 2003
Born in Lublin in 1979. Between 1998 and 2003 he studied at the Arts Faculty of the UMCS in Lublin (Maria Curie-Skłodowska University), where he got a diploma with distinction at painting under professor Jacek Wojciechowski. Since September 2003 member of the Polish Association of Artists and Designers. Since October 2003 an assistant of the UMCS Arts Faculty, in the department of Painting and Drawing II, professor Jacek Wojciechowski.

Wiola is a student of the third year of the Faculty of Arts at the Maria Curie-Skłodowska University in Lublin.

She's written about herself:

My stories, separate, a part of looking for my own form using visually simple pictures of reality. When I see some moments, people, their poses I start to look for the moment, or rather the arrangement of bodies, that would say nothing, yet everything.

It's precisely the moment when figures in a situation are suspended in the air. Thought is free. How do you depict the limitation of thought in the unlimited variety of the body? And how do you depict it the other way round? If I see such frames I process them, I add, I take the best from them so that they can speak for themselves.

That's why I choose people, the microcosm of their surroundings. Their presence, merely being with them is an infinite source of ideas. Sometimes a single gesture is an impuls, the pretext to create. Observation is simple but analysis is not that obvious. You have to study the individual's atmosphere, interpersonal relations until you reach the turning point. And the 'when', 'how' and 'where' depend on us and nobody else.

I find the state of boredom, or one may prefer the expression monotony, stillness (not only mental) very intriguing. Just as what impact it has on the functioning of a human being. What is inside the individual when the boredom really takes place, when it's visible through the body? And what are the consequences? The unknown consequences are the epicentre of this phenomenon. How the unknown outcome can build a painting's suspense. We feel invisible signals foreshadowing further progress of events, though static situation is the content. Yet what's after is more important and what gives meaning to the moment is my depicting it.
Imagine a series of pictures: heroes, something happens (even if nothing happens) – a trivial scene. After a while we notice some inconsistence, something is wrong. Because no situation is really normal. 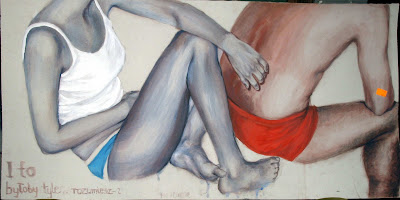 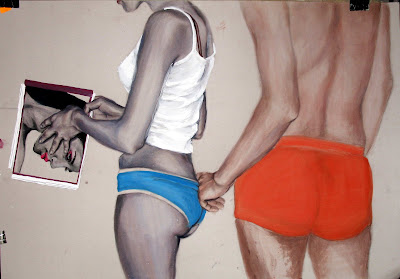 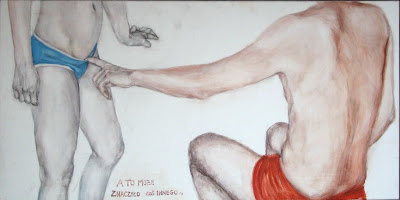 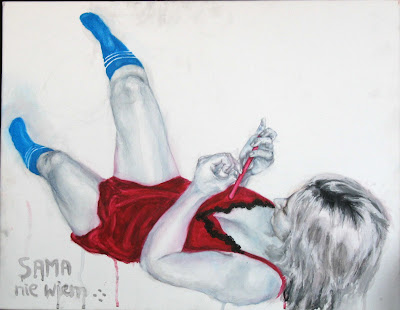 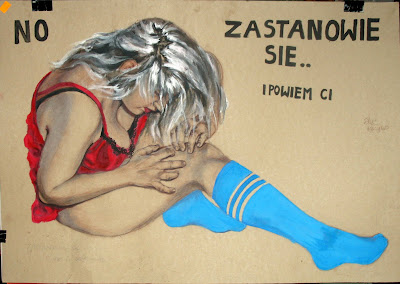 Works from the Boredom cycle.
Photos by courtesy of the author and the Young Forum of Arts.
Posted by Krzysztof Masiewicz at 03:15 No comments:

Sławek Pawszak was born in 1984 in Warsaw.
He studies painting at the Warsaw Academy of Fine Arts under Leon Tarasewicz. He lives in a block of flats in the Targówek district (Warsaw). There, in a drying room on the 8th floor, he has his studio.

We present a conversation between Sławek and Aleksandra Urbańska.

Sławek Pawszak: While painting at the Academy classes it occurred to me that some things we do are just habits, we don't need to do them. This means that when we work on a depictive painting we're not equally interested in every part, every element of the picture. There are pretexts for painting and are things that become the background.

Did you find out that not everything interests you while painting 'normal' paintings?

Yes. I realised that I felt bored. There are things which I want to paint. The other objects just fill the space between the interesting ones. I mean, people have an amazing ability to divide reality using objects. They paint things which they can call. For example, it's impossible to paint unnamed objects veristically. It seemed strange to me. Depictive painting uses certain symbolism that is somehow appealing. Back in the day this symbolism used to make sense. Certain things had certain meanings, colours had meanings, saints had their attributes. It was important. Nowadays it often becomes a kind of a game, a puzzle with no deep meaning in it. 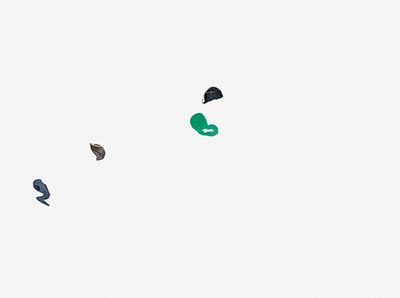 Tell me about Husserl. He seems to have had a big impact on the manifesto.

Husserl and his phenomenology idea is my new fascination. Husserl proposes a reduction in seeing. A reduction based on seeing objects the way they really look. I mean, when I look at something, saying that it has three dimensions is a piece of knowledge, completely separated from observation. Because if I don't move I don't know it. I don't know if it's hard or how thick it is. I see just a gathering of colourful spots. Looking doesn't endow any meaning. Meaning comes afterwards. To be honest, what I find the most attractive about phenomenology (as long as I understand it right) is that it's very picturesque. It's up-to-date, too, in the sense that postmodernism offers us a game with numerous themes and references etc. which are some kind of an intellectual entertainment. We read intricate puzzles and constructions but I don't think it gives us any chance for deep experiences. I don't find it spiritual. I'd rather consider it a highbrow game, a complex construction which stimulates our intellect, which is a higher level game. In phenomenological reduction and my work I see a chance for a reality clean out, for getting rid of all the added sense and associations as well as putting an end to treating reality as a set of closed objects. After cleaning up we can build a new and more real picture of our reality, an individual and honest contact with what surrounds us.

Do you reduce as a painter?

How do you choose the interesting parts?

I stare at something and wonder will I have fun painting it...

Have fun? And what about the results? 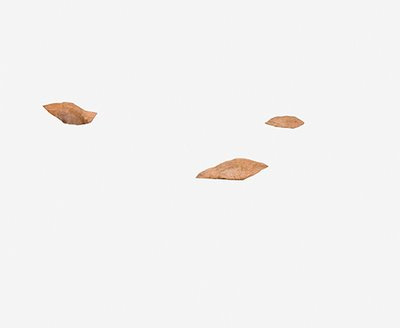 Yes. I wonder what of what I see I'd like to paint. Any other justification is hard to find. Technically, when I decide what to paint, I project it on the canvas, outline it and start to paint.
But the photo is first. Or do you also paint form nature?

No. It's depictive painting. It depicts elements of our reality.

And going back to technical details – why are your paintings so big?

It's great fun to stand in front of a big canvas. Such a size requires more concentration and confidence. I think that being afraid of spoiling a painting motivates me. Preparing the canvas to painting becomes an event. There's also an academic aspect. Thanks to the size my work won't become some kind of gadgets. The viewer must be pitted with the white space. You cannot put my painting in a handbag or on the fireplace. Moreover I tend to change the fragments at the last moment. I become bored with some objects and I notice other things.

When is that last moment?

Just before painting. The time for definite decisions comes when I'm standing in front of the canvas. The big size let's me make changes easily. I think that you don't think about composition that much when you work on a big format. What you paint is less squeezed info the frames and the canvas is no longer a painters photo-frame. It becomes a necessity – I have to paint on something. The rectangular shape of the canvas is merely a result of the stretching technique. It could have the shape of the painted objects but it would be irrational. The chosen object shall always have some surroundings. In the case of my painting it's the white canvas. 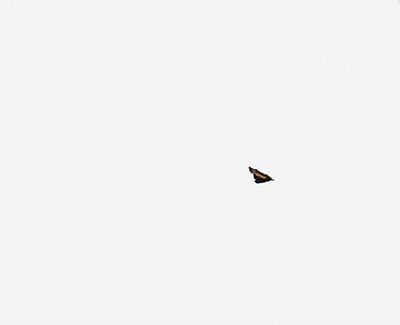 The big size helps you forget that you paint on a painting-to be?

Yes. I started with smaller sizes. Then I started to suffocate in this rectangle. The shape of the canvas had too big power over what happened on it. A natural need and habit of composing and keeping to the edges emerged.

And this is not important when you paint fragmentarist paintings?

Yes, it's unimportant because it's not a painter's frame.

What about the texture effects? How are they important?

The texture results from my doing the best I can by painting the objects in the way that in my opinion is the most suitable. I try to choose different means for certain objects. For me painting with texture is the right way of showing the element that I'm painting at the time.

What do you consider the most revolutionary about your concept?
It's about a simple thought regarding our way of seeing. The only part of our range of vision that we see acutely is its centre. While watching anything we move our eyes from one fragment to another. It's natural that what we look at and what inexplicably catches our eyes are not objects. I find dividing the painters' reality by objects artificial. To me there only are spots and shapes. What they are or whether they have names is not important. 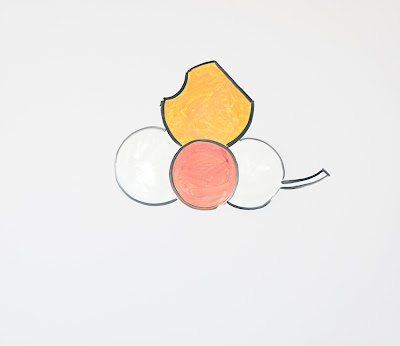 So the most natural thing about our sight has never been portrayed?

If somebody wants to paint just the shadows of apples from a still life I can't see a reason why not do it. I was wondering why painting, being a medium which naturally takes elements from the reality and transfers them to canvas with the use of artistic means, always reconstructs those elements into something whole. There are numerous paintings which depict objects on white background but that is always figurative painting. You paint hair, a lock of hair or a hair and not a fragment of a hair because the viewer wouldn't know what to make of it. Titles often help and guide the viewer. As if finding out what has been painted was the most important thing. I wouldn't call it a revolutionary finding, but I'm sure I fill a gap that might have arisen thanks to its obviousness.

You fill the realistic painting history?

Yes.
Can fragmentarism develop in painting? Or is it over?

Is fragmentarism suitable for painting only or can it be used in other arts?

For me it's the essence of painting!

So fragmentarism is a painter's reflection on reality? 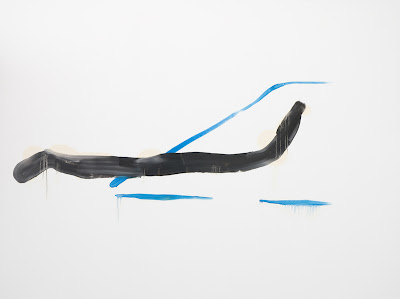 Well, yes, one of the basics of postmodernism is fragmentarism. But in this case it's only the problem of nomenclature. Fragmentarism is a coherent concept based on simple observation. It's not about fragmentarism connected with any form of eclecticism.

How should we watch you work? Don't you find it a bit hermetic, closed to the viewer in a way?

Indeed, it is hermetic. I'd rather say how I wouldn't like it to be read. I don't want the fragments that I've painted to be identified in any way. The sense of my whole work lies in showing that reality consists of, let's call it abstract forms which cluster into bigger forms. All of my paintings encourage to looking at reality from a distance, without the knowledge that we posses.

So the viewer is confronted with a concept and it's artistic effect?

Yes, the poor viewer is put into an awkward situation. But as I've already said, I'd like these paintings to encourage to a different angle of watching reality. 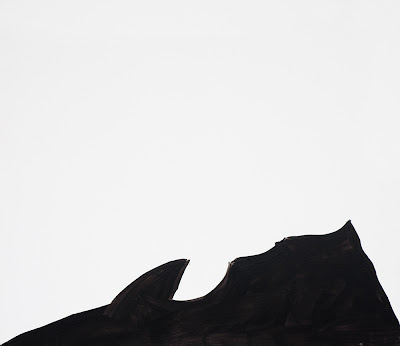 The paintings register your seeing?
Yes.

Before we finnish could you tell us about your fascination with Tuymans?

I think that my painting and finding fragmentarism effected from a rebellion against Tuymans who used to overcome me. There is a lot of cinematographic means in his painting. It's all based on some frames, we see close-ups, there are blurred elements. Watching his work I often had the notion of a stopped movie. I wanted to do something different, something more about painting and coherent with the medium, something non-movie-like. I gave up the tempting film frames. It occurred to me that you need a really serious reason to paint.

The photos of Sławek Pawszak's works thanks to Galeria Zakret, Warsaw.

Posted by Krzysztof Masiewicz at 10:50 No comments: